If you haven't already heard about it, I would highly recommend checking out Apollo on Adobe Labs (http://labs.adobe.com/wiki/index.php/Apollo).

Apollo is promising to be a cross-OS runtime engine that will allow you to leverage Flash, Flex, HTML, and JavaScript in desktop software. The runtime will leverage the WebKit HTML / JavaScript engine, which is what Safari is based on.
Posted by Michael Imhoff at 8:37 PM No comments:

So, I ran into yet another roadblock with Vista when trying to install the Cisco VPN Client. I got it to install, but then could never get it to start. After doing some research, I found that they finally released a Vista capable version of the VPN Client.

Modal windows, modeless windows, and popup windows all have a number of caveats that are somewhat annoying. Some time ago, I discovered subModal, which using an iframe, a div, and a nice mixture of CSS to create a great modal window overlay that is a joy to work with.

I highly recommend that you check it out.

If you run into any problems with it, let me know as I've made a few tweaks to make it a bit more browser friendly. 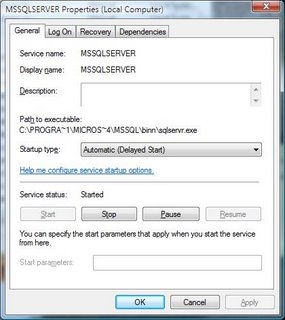 I just installed CFMX 7 on Vista Ultimate but it wasn't a very streamlined process. The CFMX installer doesn't support IIS 7 so a number of manual steps were needed after the fact. There is also a compatibility adjustment that you must make.

First, you need to run the ColdFusion Installer using the Program Compatibility Wizard. This will normally appear after the installer hangs. If it doesn't, the location to create a shortcut with is "%SystemRoot%\system32\mshta.exe res://%SystemRoot%\system32\acprgwiz.dll/compatmode.hta". There are a few options that you are going to want to choose.

This should get you through the basic install. For whatever reason, the isapi filter that normally handles each request is not created. A Script Map needs to be created in the Handler Mapping in IIS for your server.

Prior to setting up the Handler Mappings, you need to download jrun.dll from another installation and make sure that file exists in the following directory : 'c:\cfusionMX7\runtime\lib\wsconfig\1' -- You may want to simply copy the entire "1" directory under wsconfig. 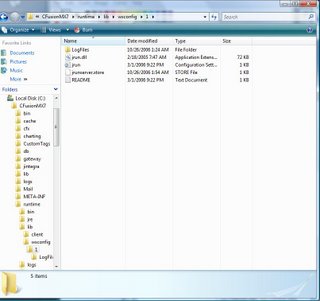 First, pop open the IIS Console which looks like so, although you probably won't have either of the ISAPI options if you did a default install of IIS. 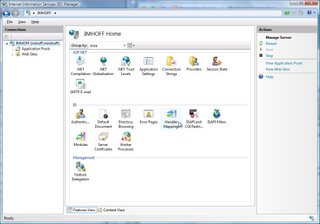 You will want to then open up the Handler Mappings option and create a new Script Map. You need to create one for your cfm files and another for your cfc's. 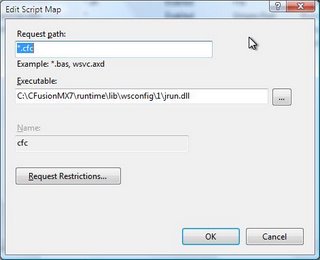 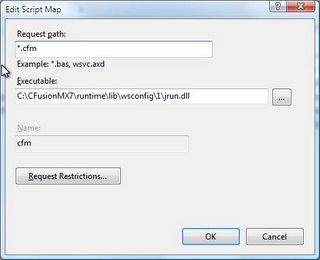 When you're done, the list of Handler Mappings should look familiar to this. 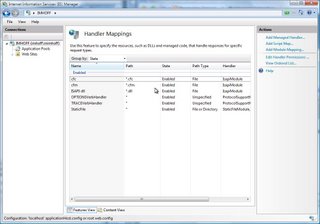 A this point, you should probably restart CF and IIS and give it a go.

I wanted to determine how long my sessionTimeout value was set for in a given application. After quite a bit of trial and error, a 'value' created with CreateTimeSpan() can be reverted or converted to minutes by using the following calculation:

So, to put that in perspective when using session timeouts, the following code would be applicable.

Posted by Michael Imhoff at 2:45 AM No comments: